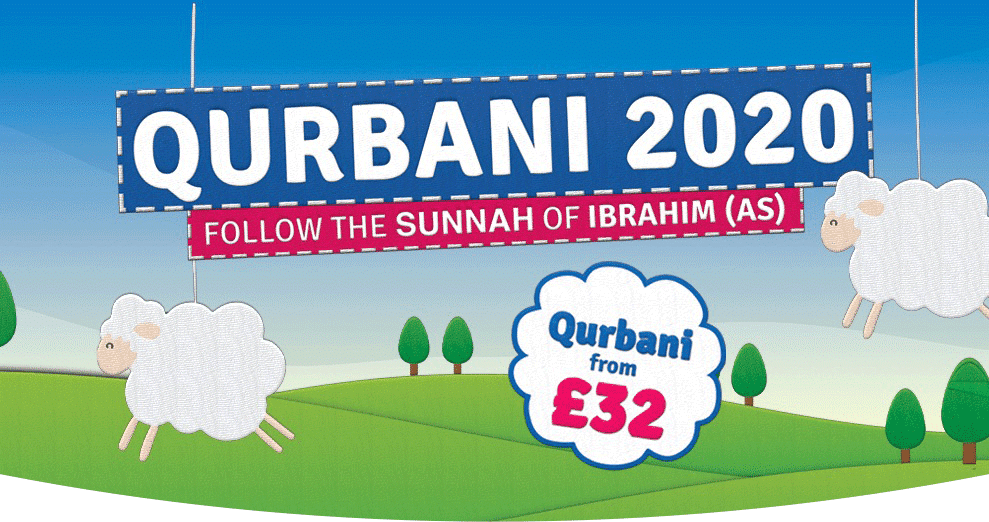 The Messenger (PBUH) was asked what Qurbani is, he answered, “It is the Sunnah of your father Ibrahim. For every hair of the Qurbani you receive a reward from Allah.” (Al-Tirmidhi)

The Messenger (PBUH) was asked what Qurbani is, he answered, “It is the Sunnah of your father Ibrahim. For every hair of the Qurbani, you receive a reward from Allah.” (Al-Tirmidhi)
Give Qurbani
Follow the Sunnah of Prophet Ibrahim (AS)

Qurbani means sacrifice. Every year during the Islamic month of Dhul Hijjah, Muslims around the world slaughter an animal – a goat, sheep, cow or camel – to reflect the Prophet Ibrahim’s willingness to sacrifice his son, Ismail, for the sake of Allah.

The Prophet Muhammad (saw) was once asked by his Companions: (ra) “O Rasoolullah! (peace be upon him) what is Qurbani?” He replied: “It is the sunnah of your father Ibraheem (as).” They asked again: “What benefit do we get from it?” He answered: “A reward for every hair (of the sacrificed animal).” “And (what reward is there for animals with) wool, 0 Rasoolullah (saw)?” they asked. “A reward for every fibre of the wool.” He replied. (Ibne Majah)

When a person slaughters a Qurbani animal, he is forgiven at the fall of the first drop of blood, and verily, the animal shall be brought forward on the day of judgment with its blood and shall be increased in weight seventy times more than its own weight, and thereafter it will be placed on the scale of deeds. (Kanzul’Ummal)

On whom Qurbani (udhiyah) is wajib?

Qurbani is wajib on every Muslim who is of sound mind, mature (who has reached the age of puberty), museum (i.e. he is not a traveller) and possesses the amount of fifty-two and a half totals of silver (612-36 grams) or wealth equivalent to that value which is in excess of one’s basic needs. It is not necessary that this amount is in one’s possession for a complete lunar year.

Its possession during the three days of Qurbani will make it obligatory. Qurbani is not incumbent on a child or an insane person, whether they own wealth equivalent to the amount above or not, nor is it wajib upon their guardians to perform it on their behalf. Similarly, it is not wajib on a traveller.

It is highly virtuous for one on whom Qurbani is not wajib to offer sacrifice for the pleasure of Allah. He will be eligible for all the reward mentioned in the hadeeth.

During the days of Qurbani, sadaqah and charity cannot compensate for Qurbani.

However, if the days of Qurbani had passed, and it was not offered due to not knowing, negligence or for some other valid reason, then it becomes wajib to give in sadaqah the price of one Qurbani animal.

If a traveller returned home or a person acquired the required wealth on the 12th of Dhul Hijjah (the fifth day of Hajj) before sunset, it will be wajib upon him to perform Qurbani.

Here’s a list of Frequently Asked Questions that you can use for further guidance.

Who is required to perform Qurbani?

According to most Muslims, Qurbani is obligatory upon every sane adult Muslim male/female who has wealth in excess to his/her needs. Normally those who are eligible to pay Zakat are obliged to give Qurbani.

How does Crisis Aid choose recipients of Qurbani meat?

It is the policy of Crisis Aid that the selected beneficiaries of the Qurbani project are made eligible based on a scoring system, which ranks families according to need. The scoring system is based on the following objective criteria:

A thorough needs assessment will be conducted to objectively identify the weighting and priority of each of the above criteria. These are then applied when selecting beneficiaries to ensure we reach the neediest without bias or subjectivity in selection.

It is the policy of Crisis Aid to distribute only one Qurbani meat pack to each family regardless of family size.

Do I have to perform Qurbani on behalf of my children?

– Every sane Muslim of mature age (who has reached puberty)
– Non-travelling persons
– Those who additionally own wealth which is beyond their needs, equal to (or more than) the current level of nisab (87.48 grams of gold or 612.35 grams of silver)

Do you need to give all the names of the people who are giving Qurbani?

No, this is not necessary as long as you have made the intention that you are giving this Qurbani on behalf of a certain person.

What types of Qurbani meat does Crisis Aid provide?

Fresh Qurbani – in most countries animals are purchased and slaughtered locally.

Until when can I make my Qurbani payments?

The time for sacrifice ends when the sun sets on the fourth day. Therefore, you can make payments right up until the end of third day after Eid (13th of Dhul-Hijjah) before Maghreb salah. Crisis Aid has already purchased the animals to be slaughtered.

How is a Qurbani volume decided? Is it a cow or a sheep?

The volume of Qurbani is representative by the allocations committed for each country. For donors, the following information can help you calculate your donation:

Can Qurbani meat be sent to my village in a particular country?

Crisis Aid performs Qurbani as part of our overall seasonal programme. Therefore, the people who benefit in Ramadan and from our general projects, Insha’Allah, would also benefit from Qurbani. This allows us to focus our efforts and help the same people to improve their lives, rather than providing small amounts of help occasionally but not achieving great successes.

How can we really be sure that the Qurbanis we pay for in some of the poorest countries are actually taking place?

Crisis Aid has been performing Qurbani since 2013. As with our other projects, Crisis Aid’s work is constantly monitored and audited. Reports are also produced each year showing what activities have taken place in each country.

If I pay for Qurbani on behalf of someone else, will their name be called out at the time of the slaughter?

No, as Crisis Aid is conducting hundreds of thousands of Qurbanis around the world, this is practically not possible. It is also not necessary to pronounce the name of the person, even if you are making a Qurbani on behalf of someone else. Simply making the intention that you are giving this Qurbani on behalf of a certain person is sufficient.

These beneficiaries are all people who fall under the categories of poor, needy, oppressed, widows, orphans and so on and so forth.

2. Time for Qurbani
In towns and cities where Jumu’ah and ‘Eid salah are performed, Qurbani is not permissible before the ‘Eid salat. If the Qurbani has been offered before the Eid salah, it will have to be repeated. Therefore, the time for Qurbani commences after Eid salah on 1Oth Dhul Hijjah until before sunset of 12th Dhul Hijjah. It is permissible, but not preferable to perform Qurbani at night.

3. The Qurbani animal
It is permissible to offer in sacrifice a goat or she-goat, sheep of all kinds, cow, bull, buffalo or camel.

It is necessary that the goat is one-year-old, whether male or female. A cow, bull or buffalo will have to be two-years-old, and a camel five years. Animals that are younger are not suitable for Qurbani.

A sheep (of any kind) not less than six months old, but strong and healthy enough that it appears to be one-year-old will suffice for Qurbani.

A cow, bull, buffalo or camel will suffice for seven persons provided no one’s share is less than one-seventh and the niyyah (intention) of all partners is to attain reward and not merely to obtain meat.

The Qurbani of only one person can be performed from a goat, sheep or ram.

If an animal seller says that the animal has reached the required age, and outwardly there is no sign to disprove it, then it is permissible to rely on his statement. Animals that are castrated can be used for Qurbani. In fact, this type of animal is preferable.

4. The following cannot be used for Qurbani
– Animals that are blind, one-eyed or have lost one-third or more of their eyesight.
– Animals that have lost a third of their ear or the tail. Similarly, the animal which has no ear from its very birth is not permissible.
– An animal whose horn has been broken off from the root.
– An animal which has one leg lame to the extent that it walks on three legs only and is unable to use the fourth leg.
– An animal is so lean and thin that its bones have no marrow.
– An animal is so weak that it cannot walk to the place of slaughtering on its own.
– Animal completely toothless or one that has lost most of its teeth.

It is virtuous to purchase the animal for Qurbani a few days prior to slaughtering and care must be taken in feeding and nursing it.

5. Method of sacrifice
It is more virtuous to slaughter the animal with one’s own hands. If one does not know how to slaughter, it is preferred that he remain present while someone else is sacrificing the animal. It is not necessary to make the niyyah (intention) of Qurbani with the tongue, however, it is necessary to say Bismillahi Allahu Akbar when slaughtering.

Use a sharp knife and slaughter the animal quickly so that it does not suffer.
Do not sharpen the knife in front of the animal.
After slaughtering, do not skin the animal before it becomes completely cold.
Do not slaughter one animal in the presence of another.

It is mustahabb (desirable) for one who intends to perform Qurbani to refrain from cutting hair or clipping nails from 1st Dhul Hijjah to 10th Dhul Hijjah, (i.e. until after Qurbani).

6. The Qurbani meat and skin
– It is permissible to eat the Qurbani meat.
– It can also be distributed to relatives and friends whether wealthy or poor, Muslims or non-Muslims.
– It is better to divide it into three parts. One for the family, one for relatives and friends and one for the poor and needy.
– The skin of the Qurbani animal can be kept for personal use, e.g. using it as a prayer-mat, water bag, etc.
– If the skin of the Qurbani animal is sold, then it is wajib to give that amount in sadaqah to the poor (i.e. those who are eligible for Zakah).
– It is not permissible to give meat, fat, etc. of the sacrificed animal to the butcher as his wages.
– The meat of the animal slaughtered by partners should be shared by weight and not by estimation.
– The rope, cover, etc. of the animal should be given away as sadaqah.

Aboo Talhah (RA) has related that the Prophet (SAW) sacrificed one ram and while sacrificing the other he said: “This is on behalf of every one of my ummah who believed in me and testified (to my prophethood).” (Tabrani)

Give Qurbani
Scroll To Top